FREE Registered Shipping for all orders above €50, to any address in Ireland. Photo by mnm.all on Unsplash

Practically everyone who used an iPhone, iPad, MacBook or any other mobile device for more than two years, faced the problem of the rapid discharge of its battery. If immediately after the purchase the device battery lasted up to the night with confidence, after a long period of operation it barely makes it to the afternoon.

This is not surprising. After each charge-discharge, the battery capacity inevitably drops, and the iPhone, iPad or Mac will be reanimated to a new state only by replacing the battery.

We will deal with the issue and consider three ways to check the iPhone or iPad battery using software for different platforms: coconutBattery for OS X, iBackupBot for Windows and Battery Life for iOS - everyone will choose the most convenient one for themselves.

1. A critical number of cycles - when the battery can no longer make it.

To deal with this issue, we decided not to take any official or data from the internet. Instead, we turned to several repair shops that face this problem almost daily.

Fortunately, they all saw in us a potential client and did not refuse to give us expert information. Most of the respondents (in total, we turned to ten unofficial service centers) marked 500 cycles for the iPhone, iPad, and MacBook until 2009, and 1000 cycles for the MacBook after 2009 as official critical indicators.

There's no other option - after 500 recharge cycles, the iPhone battery needs to be changed.

Of course, after these values, the device can be used further, but at this level, the actual battery capacity reaches almost 80% of the declared one and is rapidly decreasing.

However, there may be exceptions to this rule. For example, a battery can behave quite normally after 1500 cycles, and sometimes it “dies” after 40. In the latter case, this is probably due to moisture entering the case or voltage drops, which the built-in protection could not cope with. There is nothing complicated about using coconutBattery. We need the first and last tabs of the program - they indicate the number of charge-discharge cycles (Cycle Count) of the MacBook and iPhone or iPad, respectively.

In my case, this is 194 cycles for personal MacBook Pro 13 ’’ and 686 for the iPhone 6S Plus of my girlfriend (I am a fan of Android). While trying to make these tests I understood that I need to change the battery for my girlfriend's phone.

3. Check iPhone or iPad battery with iBackupBot for Windows 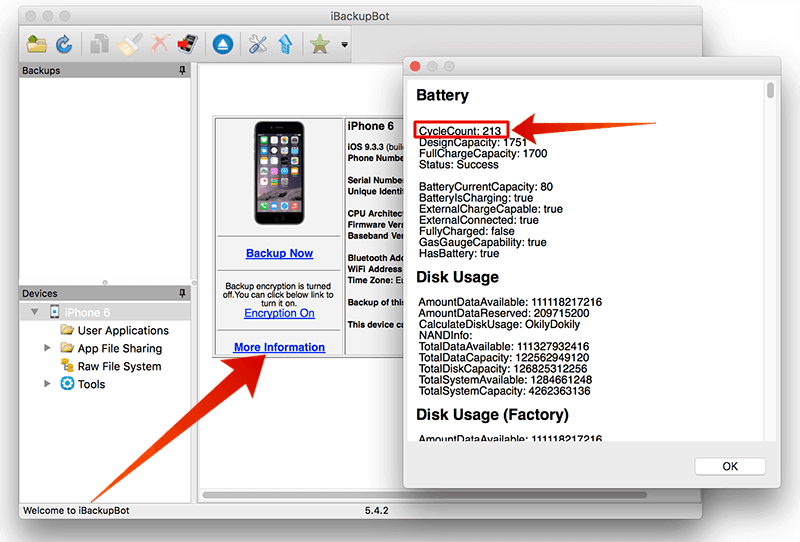 Where to download: trial on the official developer site.

Let's be honest, iBackupBot is a terrible, non-intuitive utility that would never have been in such a compilation if coconutBattery developers had adapted their solution for Windows.

Nevertheless, there is all the functionality we are interested in, which is in the menu More Information - the CycleCount line. This is the way you can check your battery health, meaning the maximum capacity of your battery in the settings of your phone.

As you can see the results are pretty close to the ones of coconutBattery, which I would more likely advice to trust.

5. "Frosty" test iPhone and iPad - especially relevant in the winter If the iPhone or iPad is turning off after 10-15 minutes spent in the cold, its battery definitely needs to be changed. A normal battery should behave as normal as in warm places.

Nevertheless, you should not abuse mobile devices in the cold, because there is nothing useful in such stressful situations. Moreover, the MacBook is generally very poor in frost, so it’s not necessary to work with them in the winter.

And how much do you have? Is it time to change or can you suffer?

Check our iPhone, iPad and iPod Battery Collections and give your phone a better longer period being "alive".

Be the first to know, when a new blog post is published

Any order to Ireland, using standard Delivery, will be shipped for free.

In case your order arrived with malfunctions or is not a good fit, you can return it.

We're available for any kind of questions related to product, compatibility, specifications etc.

By Paypal or Card, your payment is always secure.